On labels: A critical look at blockchain discourse

Labels matter. Familiar labels take something complex and place it into a tidy little box. Thing A is a member of Set S. Thing A is now endowed with the qualities of S.

Labels and jargon, once accepted, tend to bring critical thought to a halt. They could be considered thought terminators. Powerful labels endow each of their subjects with the features of the aggregate. Attributes by association.

The language we use to describe things shapes our understanding of those things. This isn’t a new insight, but it’s one worth repeating. Allowing labels rich in implication to attach themselves to new concepts is dangerous. This practice can warp your thought processes by coloring a concept for you before you’ve had the chance to independently make up your mind about it. And the attack surface is huge: we overwhelmingly rely on heuristics, labels, narratives, taxonomies, and stereotypes to guide our behavior.

The reason for this is simple — thought cycles consume resources, and resources are finite. Generally speaking, we optimize for mental behaviors that satisfice, rather than trying to achieve correctness. This has the effect of yielding mental expenditures that are just sufficient.

So while heuristics and mental shortcuts are generally desirable, they carry with them backdoors in the form of labels that carry little packages of meaning which you might not even be aware of. When this is self-inflicted, we chide ourselves for stereotyping or making category errors. The more interesting case is when this happens externally — when you uncritically accept a label for something which colors your own interpretation.

Let me formalize this concept: a semantic injection, in my view, is the covert insertion of an idea into your brain which occurs when a novel concept is related to a familiar idea. The wrapping slyly takes some information or emotional feeling and attributes it to the subject being considered. To put the idea into simple terms: to uncritically accept framing that someone else has devised for you is to grant them control over your own thoughts. And this is also self-inflicted — we do it to ourselves by using labels that are inappropriate to the thing we are defining.

Let me provide a few examples of what I mean. I’ve collected a few terms which are common in this industry and carry hidden semantic baggage. I’ve ventured some hypotheses for how these might distort thinking. 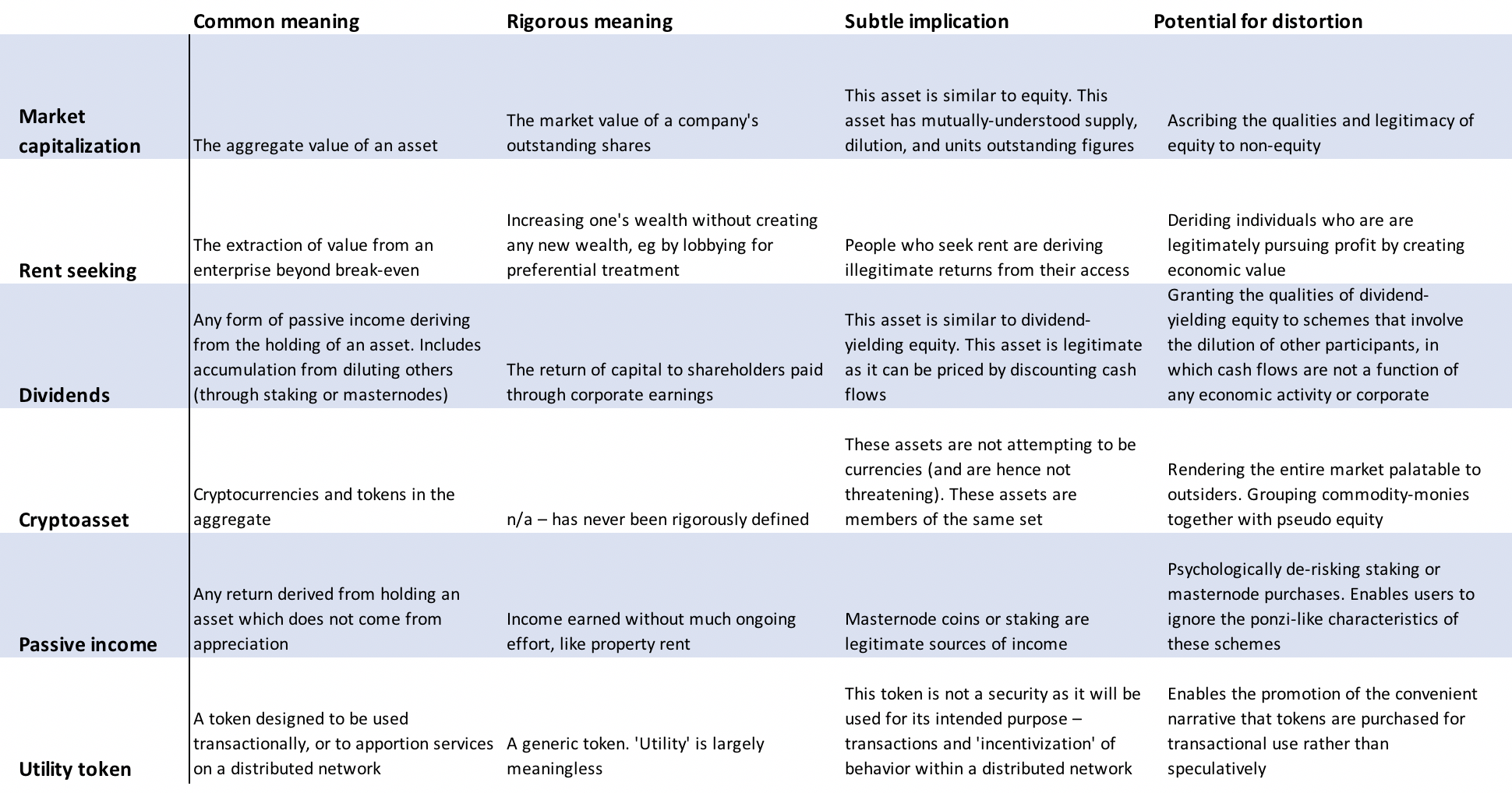 For a longer justification of a critique of the usage of the term ‘rent seeking’ in this industry, read Tony Sheng’s excellent piece on the topic.

You might be surprised to see market cap in there. But there’s a reason I have suggested people use network value instead. Market cap comes from the world of equities — the regimented, regulated world, where information is verified and mediated through a set of trusted intermediaries. In crypto land, there are no such reliable intermediaries. Instead we trust CoinMarketCap to give us the appropriate figures about circulating/noncirculating supply, and exchanges like TradeOgre to accurately report trading volumes. If you think I’m being paranoid, recall that Bitconnect peaked at #8 on CoinMarketCap. It met all of CMC’s standards for legitimacy. Or spend a few minutes looking into Veritaseum’s supply. Or ponder briefly why a fork like Bitcoin Private claims a circulating supply of 20m when 17m were inherited from Bitcoin, and likely will never move. So by using market cap, you are implicitly saying “this data is probably reliable” and “these things resemble equities.” Neither is the case. (See this post from the Sia developers about “market cap” for more.)

Moving on, probably the most pernicious and ultimately damaging narrative in this entire industry involves conflating an asset which is meant to be held — a non-sovereign store of untamperable wealth — with “assets” which are glorified coupons or carwash tokens.

Cryptoassets does this effectively. “Bitcoin and GenericUtilityToken (GUT) are both cryptoassets, they live in the same conceptual bucket. Why can’t I value them in the same way? If GenericUtilityToken attracts the same number of users and developers as Bitcoin, shouldn’t it roughly achieve the same value? At the very least, let me value GUT as a fraction of Bitcoin.” This misunderstanding will probably end up costing investors billions of dollars.

"Blockchain” plays on a similar linguistic sleight of hand. Bitcoin uses a blockchain to achieve its desirable qualities — amazing consistency, uptime, incorruptibility, and reliability — and thus the blockchain ought to be able to endow other databases with those same qualities, the argument goes. Not mentioned, of course, is Bitcoin’s reliance on other features: proof of work block formation, the actual doling out of tokens for miners, few or no central points of failure, a robust social contract enforcing the immutability of its core values, an egalitarian node topology, a committed community of ideologically-minded developers and users, and so on. The semantic weight of blockchain borrows from Bitcoin’s demonstrated robustness, but to carry that context over to cases which don’t resemble Bitcoin in the slightest is to misapply the term. The Bitcoin semantics don’t belong when IBM says “blockchain”! This article from the Verge makes the same point.

Another interesting case of semantic injection is “incentivization.” The term is used wantonly to describe novel schemes in which a protocol creates a two-sided market with consumers of some distributed good (let’s say essay-writing) on one side, and people provisioning that good on the other. In between them sits a cryptoeconomic protocol which mediates the distribution of resources in the system, eventually finding an equilibrium price for the good, presumably well below the existing market rate (the protocol doesn’t need to pay for office space!). The appeal of incentivization is to create a protocol which runs on its own and efficiently re-apportions resources from places where it is bountiful to places where it is scarce. The native token is key to all this of course — those in need of essays use the token to pay the essay-writers. This is called incentivization, and it’s a mainstay in virtually every blockchain-oriented project. It’s the justification for the existence of the token in most cases.

What’s the problem here? Well, promoters are injecting semantics associated with Bitcoin’s incentive — the block reward — and implying that it will yield those same benefits in an alternative context. However, Bitcoin’s incentivization mechanism has the benefit of being extremely simple. Many of these incentivization schemes assume that humans will act rationally and predictably and deliver services to end users in a complex blockchain-mediated network. They are generally orders of magnitude more complex, and none have demonstrated success yet.

Additionally, designing two-sided networks that provision services on a distributed basis creates a system which is near-impossible to police. Oftentimes, enforcing good behavior is itself a claimed function of a token. However, for many of these networks, first-order economic incentives may not rule. And more broadly, humans are incentivized by a great deal of things, many of which are non-economic. Despite this, incentivization is used as a handy semantic tool to port over Bitcoin’s track record with PoW to schemes which do not resemble it in the slightest.

Ultimately, semantic injections succeed because we are generally incapable of allocating the mental resources to consider new concepts qua themselves. Our views of new things are mediated by how they fit into our pre-established hierarchy of conceptual boxes. We efficiently situate new ideas in our well-trodden taxonomies and generally struggle to entertain alterations to them.

Why am I writing this missive? To remind you that you are being bombarded on a near-continual basis with seemingly-neutral labels which nevertheless carry semantic baggage. People you trust make implicit associations between wholly incompatible things, and you accept them, because why shouldn’t you?

I’m not telling you to descend into a skeptical fog and rebuild your knowledge from first principles. I’m just suggesting that you be on your guard against the insertion of covert narratives into your brain without your permission. Raise your epistemic guards. Be aware that popular labels in this industry carry hidden meanings, with the effect of tricking outsiders, regulators, the media, or investors.

So, let’s commit to revisiting some of the definitions and terms that we take for granted. Let’s consider whether using the language of equity, market capitalization, and dividends is appropriate in this context. Let’s be wary of category errors. And if you see someone erroneously using an established concept to describe something new, feel free to call it out for what it is: semantic injection.

Thanks to Hasufly and Derek Hsue for their feedback.